At first glance the passionately colored mandala-like images of June Edmonds and the softly nuanced black-and-white drawings on photographs by A.M. Rousseau couldn’t appear to be more distant from one another. Underlying both of these artists’ work however is an exploration of the certainty that there are invisible energies that bind the world together.

Edmonds’ color fields are made up of short bursts of accumulated hues. These radiate out in distinctive patterns. Some are slightly arching; others run in alternating bands. Edmunds deploys a veritable kaleidoscope in the form of thick, opaque acrylic jots, which generally lay on top of each other. In No Telling (undated) there almost appears to be a seed that is bursting out in growth if not into blossom. In other works such as Hela Scat (undated), there is a striation of forms on the canvas and a banner-like use of color as though it were a kind of emblem on a hereto-undiscovered anthem to the inner life.

Like many artists who explore spirituality through pure form and color, Edmonds’ work makes reference to the power of archetypical systems. In particular she utilizes the ideographic symbol system of the Ashanti. Edmonds describes her work as a doorway or threshold through which one enters into memory—yet these abstract constellations are clearly not the figurative memories that A.M. Rousseau investigates in her mixed media works. 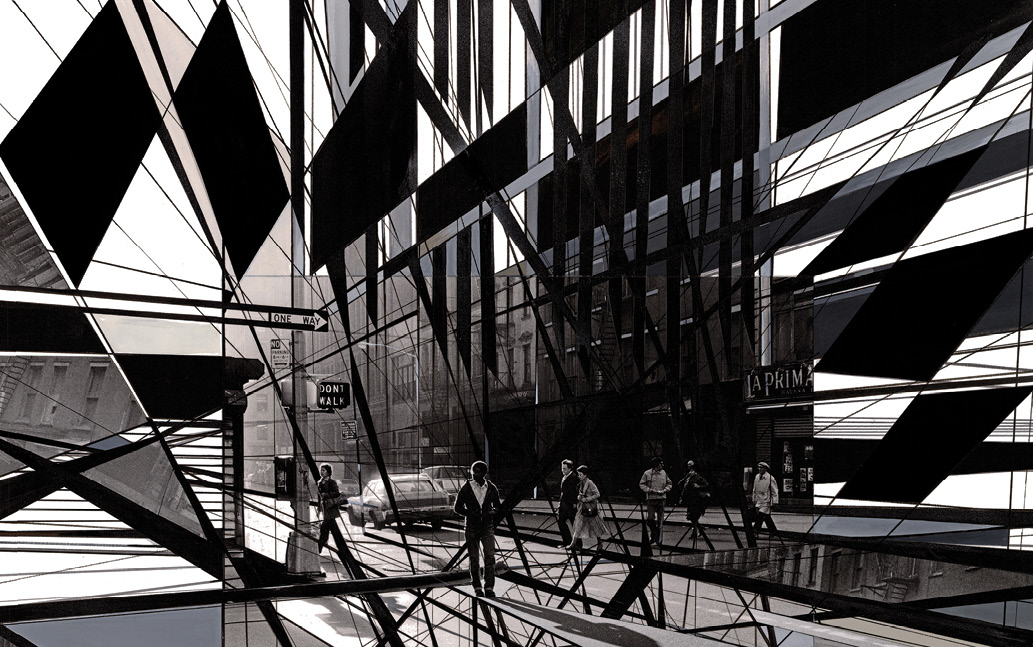 The first stratum of Rousseau’s compositions consists of photographs that the artist overlays with drawing, in which the mark making sometimes follows the underlying image while at other times deviating from it entirely. Or, in a variation, photographs are cut up and then collaged together to create multiple layers. In Daydream (undated), for example, a smaller head of a woman outside a window is looking off into the distance. Her eyes are closed in a dreamy way. In the foreground, buried in a chiaroscuro swirl of grays, blacks and whites, there is a partial portrait of a man and a small dog. Likewise, in Reverie(undated) the image of a man—photographed from behind, looking out of the window onto a street scene—is surmounted by swirls and graceful ribbon-like forms that animate the entire surface. Uncovering a path away from the figurative reality of a photograph, the viewer is taken to a place where the intersections are not literal, but imaginative. Rousseau’s work alludes to a life of the spirit that moves beyond the merely visible.

While the physical spaces of LaunchLA are quite diminutive, these two artists engage in diverse and expansive ways of considering the web of things seen and unseen, which collect and hold us in our day-to-day existence.