Leigh Salgado - A Feminist For Our Time

Victoria Looseleaf, ArtNowLA, October 14, 2021
Open a larger version of the following image in a popup:
Share

A Feminist For Our Time 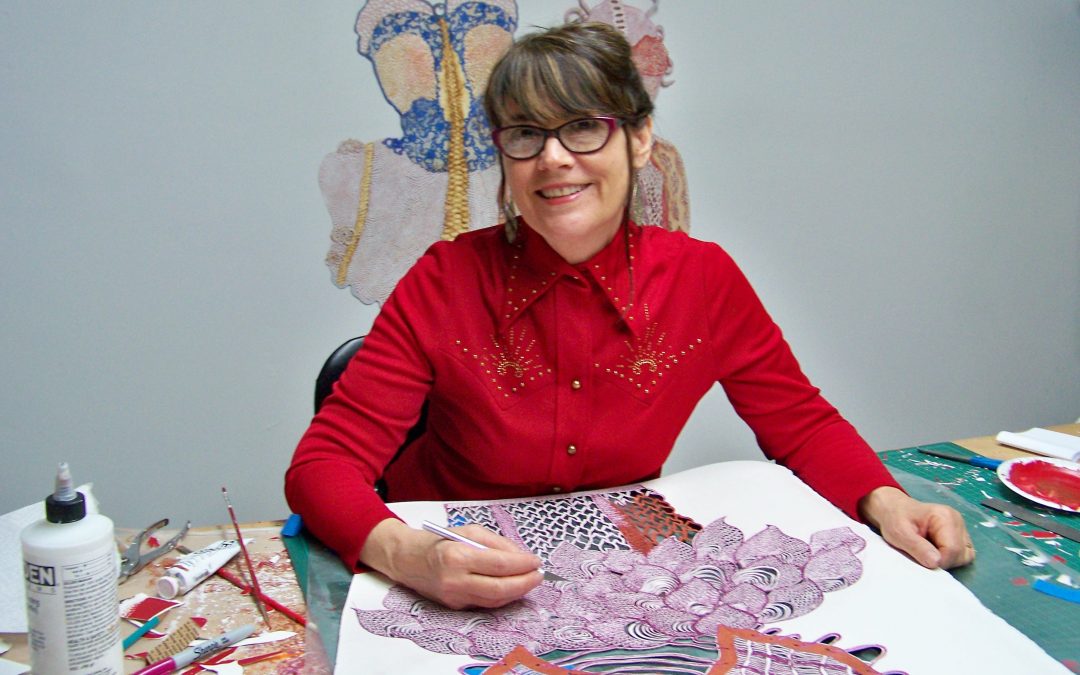 In her three-decade career, San Diego-born Leigh Salgado, whose labor-intensive, feminist-driven work – sometimes labeled Sculpted Drawing and includes altering monotypes with cutting, painting and the addition of eyelets or fasteners, with each drawing resembling a range of readymade objects such as bustiers, underwear, lace, corsets, netting, fabrics, metal and other articles of clothing – plumbs her own psychological depths only to discover what makes her love work and life.

What historical art figure would you like to have lunch with and why? Jay DeFeo. The Rose alone kind of validates her whole existence as an artist. She did all kinds of stuff and made a ton of work. The retrospective in New York a few years ago was amazing. I’d love to talk about her whole obsession with The Rose. She spent eight years working on that; and maybe it’s my favorite. I just like that she was obsessed with just working, because people are so focused on the career aspect. Jay was a beatnick/slash/hippie artist in a way, and I think she forewent some things that would have been good for her career because she was more focused. And her friendship with Bruce Conner – I’d like to talk to her about, because I think that was pretty interesting. 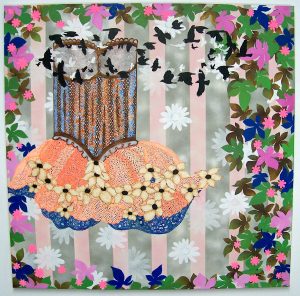 I discovered her in a funny way. I was with some gals doing some art thing in the mid 90’s – my art hadn’t become as focused as it is now – and one gal said you should see Jay DeFeo’s rose at the de Young Museum. I didn’t even know she was a woman. I didn’t know what The Rose was. I wasn’t married to Mat [Gleason] then, I was married to somebody else and I said that I want to drive to San Francisco and see this DeFeo painting. I’m walking around and I don’t see any painting by her. There was a Don Bachardy show – there was this big beat show there – and we walked down the hallway and at the end of the room there’s this painting /slash sculpture on the wall and I thought that is just so fucking amazing. I go straight to it, read the sign and it’s The Rose, ‘This is what I came to see.’ 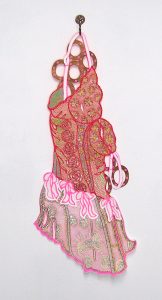 What did you purchase with the proceeds from your first sale? I probably just bought more art supplies. I wouldn’t have bought a purse or something like that. It either went to food or art supplies, probably art supplies, though.

What words or phrases do you overuse? I’m always throwing around the word, ‘femininity.’ That’s what I deal with in my work. I wish there were more words in the English language, but that’s my interest – my being a woman in the world and growing up a female. I probably use that a lot – and any time an art statement comes up. I’m not really very eloquent verbally, so I say, ‘wow’ a lot, just because I don’t know what else to say. 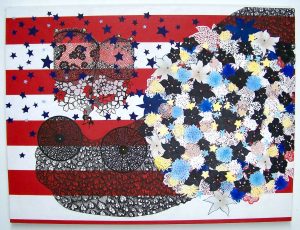 How do you know when a work is finished? I hate to say it, but I constantly struggle with that, because my work gives me this nagging feeling that it’s not finished. I think I know it’s not finished, but I don’t trust that feeling 100%. Maybe I’m trying to achieve a perfection that’s not really attainable. I think I’m not really good at that. I just go with when I think it’s finished enough. I’ll go back and re-work a work a few years later if I look at it and think it needs that. I just don’t like leaving things alone like some artists do.

When and where were you happiest? That may have been the hardest question for me, because I’m kind of a jolly person, but also a depressed and angry person. I never really consider myself happy for stretches of time – it’s more like [there are] these moments. So I guess if they add up enough, everything’s kind of worthwhile. Maybe when I left home and went to UCLA, maybe that would be the happiest – when the world opened up to me at that time. Maybe that’s the closest to it. 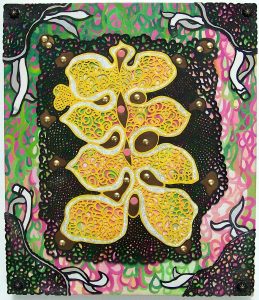 What is your most treasured possession? It’s my wedding ring. My current wedding ring – I’m on my third marriage. It’s sort of embarrassing. It’s the last, I’ll tell you that. Mat’s sister made the rings for us, and they’re matching. She used gold from my father-in-law’s teeth. He had some teeth pulled and had the gold removed and he gave her the gold. She used that in our rings, though they’re not only made out of his gold; it’s a combination of stuff. 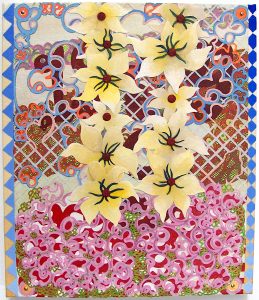 Where is your ideal escape destination? I don’t have one, but I’ll tell you where I want to go. I’ve never been to Barcelona. I want to see the Gaudi architecture before I die and I just want to hang out there – eat and drink and hang out on the beach. That’s where I really want to go.

What’s the worst survival job you’ve ever had? I was a bank teller for about a year and it was miserable. 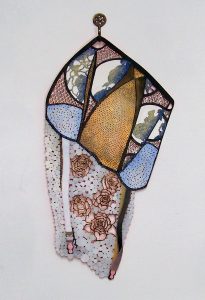 What TV series from your youth best describes your approach to life? There are two shows, because they express two sides of myself. There was Harry O with David Janssen – this was before The Fugitive. He was this brooding loner, a private dick. I love that kind of stuff. He was always getting screwed over, working for justice. That show reflects one side of myself. The other is Laugh-In. It was fun, totally absurd and goofy. It also had the mod aesthetic – the clothes, the flowers. I don’t remember watching a lot of stuff faithfully, but I did watch a lot of Laugh-In.

If you could change one thing about yourself, what would it be? I’m a ruminator, and I would try to get rid of that. I can’t help it, I think it’s just biological. I waste a lot of time focusing and worrying about stuff that should be gone. I laugh so I don’t cry, too. It kind of covers a few emotions. 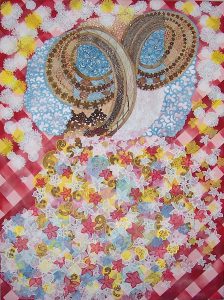 What is your most treasured memory? My first really good art show is my best memory. It was in 2007 at the Patricia Correia Gallery. I had no expectations of that show and I sold almost everything and it was just, well, I didn’t realize it would be so well-regarded, I guess. I wasn’t expecting anything. I was just so happy to have a solo show in her smaller space. I was so thrilled it just topped any expectation I had. I was kind of innocent in a way, and I was so happy about that.

What makes you smile? A lot of stuff. My husband, my dog. He’s a Catahoula mix, a Louisiana swamp dog and he’s probably half like a Rottweiler. His name is Aybar, after a baseball player. He used to play for the Angels.

What makes you cry? Just seeing how awful people are to each other, the cruelty people inflict on each other. That’s heartbreaking to me.

What is your go-to drink when you toast to a sale? Whatever’s there – Champagne, tequila, whisky. Whatever’s available I drink. I drink alcohol. 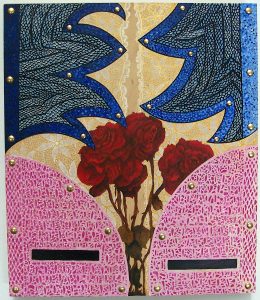 After an all-nighter, what’s your breakfast of champions? Coffee. Anything else is extra, because I’m not a big breakfast person, it’s not my favorite meal. I’ll just eat what’s kind of there.

Who inspires you? I don’t have a particular person who inspires me, but you could say Jay [DeFeo], women artists. Any woman who’s accomplished I admire.  And Ruth Ginsberg.

What’s your best quality? [Being] a hard worker, probably. I’ll stick to stuff and work hard.

What’s your biggest flaw? I think I never really mastered making money. If I’d learned how to make money when I was young it would have made life a lot easier as far as making art without having to be distracted about other stuff. It’s not a very romantic idea that artists make money, but I’ve met some people who actually learned how to make money when they were young and now have security. I wish I had more of that kind of mind set when I was younger. 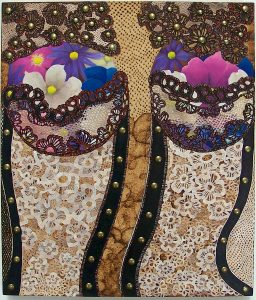 What is your current state of mind? Kind of a recognition about how short life is and I got to get done what I want to get done and not waste time doing stuff that I don’t want to do. I also have a better appreciation for some of the relationships I have and savor them and enjoy them and not worry about other people.

What do you consider your greatest achievement? I don’t really know about that one. I’m hoping I haven’t achieved it yet. Hopefully, before I die I’ll feel something. You do something then think, ‘Now I have to do this.’ There’s never a satisfaction really that something happens, so [I think] let’s push that bar out a little farther. 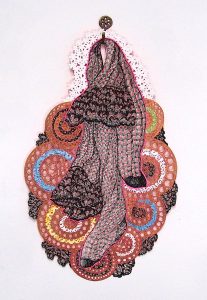 If you were to die and come back as a person or thing, what would it be? I’d like to be a real kickass good person – an activist, somebody who’s really courageous and isn’t afraid of fighting for some cause. Somebody out there doing the good fight. They may feel discouraged but they don’t give up. They’re not dissuaded by setbacks or criticism or anything like that.

Cover image: Mat Gleason; all other images by Leigh Salgado

Leigh Salgado’s exhibition As The World Turns is at LAUNCH LA, October 16 – November 13. Visit the artist at leighsalgado and on Instagram and Facebook