Myth-Making, Storytelling And Imaginations In Play In Contemporary Identities

Arbel’s works are from her Love Hope Memory series. She uses images culled from family photos to inspire figures that remain faceless. These paintings have a haunting quality because of just that — their facelessness, and yet the overall impression is of a kind of quiet joy, something to be shared with viewers, inviting them to add their own memories. Summer 1963 [see slideshow below] is one such example, in which a lustrous aqua pool spreads out around a family of four, bodies relaxed and in the water at the edge of the pool, their faces pale ovals. Her Best Friends features two faceless girls in blue dresses against a vividly colored yellow and orange floral background; the cheerfulness of that backdrop adds a sense of hopefulness to her figures. Darker in tone is the work Arriving on the Shores of America, in which a mother stands beside her daughter against a dark sea on rust-colored sand. The viewer has the sense that the pair has arrived at a so-called safe-haven yet still somehow in peril. 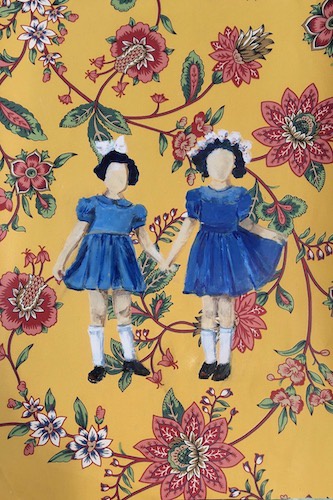 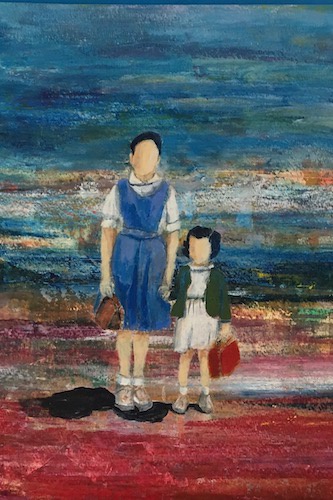 Shula Singer Arbel, Arriving On The Shores of America

The artist tells her family’s immigration story, and that of a 60s-era life in LA, but the work reaches into a larger, deeper collective spirit. Arbel says the series began three years ago and “chronicles my parents, Michael and Edith, who met in 1946 in a Displaced Persons Camp in Heidenheim, Germany…to immigration to the U.S., to growing up in Los Angeles in the 60s.” She describes the backgrounds to her faceless figures as “surreal, dreamlike,” and it is not just the lack of facial features on her foreground subjects that renders them so. It is in the evocative body language of the figures, the small and perfect details of clothing or hair, and, as she puts it, her decision to “capture the elusive nature of memory by amplifying some specifics or muting and editing others.”

Arbel’s often vibrant palette contrasts with the featureless faces, heightening their dream-like quality. Her work expresses both her own identity and those identities into which viewers can project themselves, creating an encompassing zeitgeist that is poetic, beautiful, and elegiac.

Carla Jay Harris’ series, Celestial Bodies, does not entirely eliminate facial features in the work, but the features of these powerful women are not the focus either. Rather, Harris creates regal, spiritual images that combine a range of mediums. She terms them a link between the mythological and the real; travels as a child in a military family, and a sense of rootlessness, of being an outsider attracted her to the inclusiveness of legend. Harris notes that this work “is a mixture of photography and design to create my own reality…inspired by my childhood fascination with mythology.” She says she wants people to come away from her work “feeling a sense of belonging and connection.” 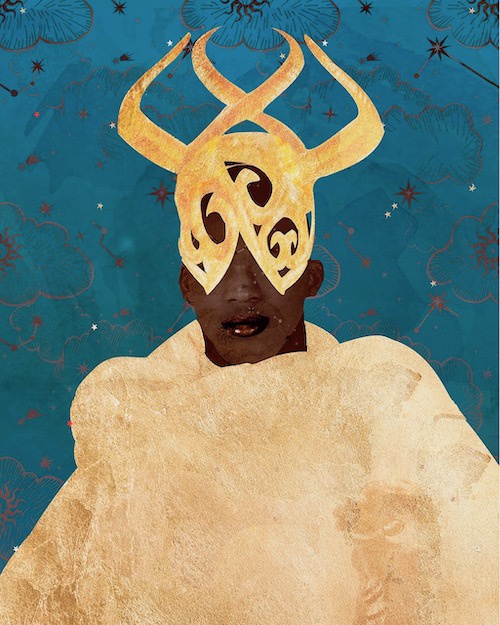 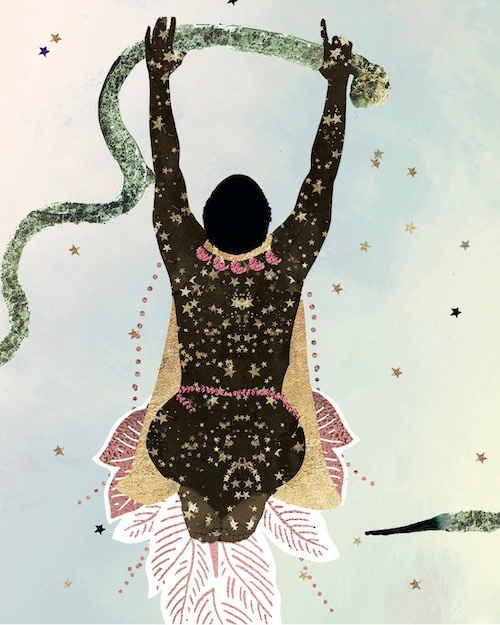 With that in mind, she creates her own world; the emphasis on gold and a rich, nearly royal blue in her palette adds to the sense that these images are icon-like, larger than mundane reality may allow. Her Untitled (Warrior) is both masked and crowned; eyes covered, the golden headdress seems to anoint the woman for both battle and leadership. The full figure of Snake Bearer IV seems engaged in a playful dance; there is no grim, Medusa-like element here. Harris makes full use of the fact that snakes influence and shape many cultures’ mythos as well as playing a part in more modern symbolic references. Her Snake Bearer V features a female figure, back to the viewer, holding a snake aloft. She is both communing with the serpent and triumphing over it. There is a sense of command in the actions of the five images of snake bearers in her works here, of a transcendent communion and power contained in each of these women.

Christina Ramos’s current series, Let’s Play, offers the most fully figurative works in the exhibition. They are dynamic and exciting images, provocative and compelling. The series’ title embraces the artist’s own playfulness, placing her grown-up subjects in the world of childhood play. They are so richly realized that her subjects seem as if they could step off the canvas and into the gallery. They are also at times wonderfully subversive, playing with the expectations of viewers and traditional male/female roles. Ramos says she is inspired by her models and “delighted when they willingly put on any concoction of clothing I hand them. After that, the process begins to dictate what I end up doing with the image itself. I love wordplay, and I will often take an image that’s rather benign, and lead the viewer somewhere else with the title itself,” she explains. Other images stem solely from the artist’s imagination. “I will have a model, with no background, and just try to see how far I can take it on a weirdness level sometimes. There is often no explanation as to the meaning of the painting itself.”

Like Arbel with her faceless figures and Harris with her myth-making, Ramos leaves interpretation up to the viewer. Some titles and works are more obvious as to intent than others, such as is Scavenger Hunt, and Ashes Ashes We All Fall Down, a darkly electrifying work. In the latter case, Ramos references the nursery rhyme’s bleak origin during the 13th century’s Black Plague. “The mask the girl is wearing is what the doctors during that time would wear to protect themselves from the plague, and the rhyme referenced carrying a ‘Pocket full of Posies’ which would be used to mask the stench of death.” She cites her love for the macabre as a part of that piece and several others; while West Wind

with its subject wearing a plaid cape sailing stiffly out in a breeze, she describes as “the imaginary explorer scanning the horizon.” The woman’s determined gaze, her hand shadowing her gaze the better to see ahead, make the viewer want to see what she sees, what passion drives her.For Ramos, her passion is to paint people. “I just love the human face and figure. I am obsessed with looking at people and trying to figure out what colors I would use to paint their eyes, or if the shadow on their face is warm or cool. I’m never really just talking to you, I’m always dissecting your facial features.” The result is work that is fierce and fabulous, a perfection of realism fused with the magical. Whether she is giving us a Davey Crockett-like female warrior with a spirit animal in The Protector, or a contemplative man, arms folded in Perception, her work is both completely alive, and utterly unique. “I think last year I started to not care if people loved or hated my work. I stopped painting for others, and just wanted to do my own thing.”

It is Ramos, Harris, and Arbel’s unique take on identities – their own and their view of others – that dazzles here, as they each do their own thing with power and grace.